Envoy says Japanese companies remain in Iran despite US sanctions

TEHRAN (defapress) – Despite the US sanctions, Japanese government and companies will retain ties with Iran, said Japanese Ambassador to Tehran Mitsugu Saito in a meeting with President Rouhani
News ID: 73122 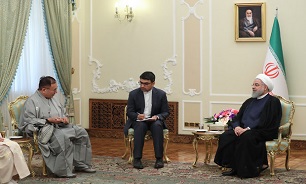 Speaking on Tuesday in a meeting with the new Japanese Ambassador to Tehran, Mitsugu Saito, President Hassan Rouhani said, “Iran and Japan have close viewpoints on many issues, and the meeting of the two countries' officials in various international organizations, especially on the sidelines of the UN General Assembly, has always been positive and in line with the development of relations.”

The president also referred to the issuance of the ICJ’s ruling in favor of Iran over the Joint Comprehensive Plan of Action (JCPOA) and said, “despite the US withdrawal, Iran continues to comply with its obligations under the agreement, and we will adhere to it as long as it is in line with our national interest.”

Calling on all countries to make efforts to preserve the JCPOA as an international agreement, Rouhani stated that the more countries distance themselves from the unreasonable demands of American statesmen, the more the JCPOA and diplomacy will be strengthened.

Turning to regional developments, Rouhani voiced Iran’s stance on the Yemeni issue, calling for an end to the war and the killing of people in Yemen and stressing the need for a political solution.

Iran has never sought tension and enmity with other countries, especially with its neighbors, he stressed.

He further underscored the need for the development of Iran-Japan consultations to resolve regional and international issues.

For his turn, the Japanese ambassador presented his letter of credence to President Rouhani, stressing the amicable ties between Tehran and Tokyo.

He maintained that despite the US pressure and sanctions, the Japanese government and companies will continue to maintain relations with Iran, adding that Japanese traders and officials trust in the future of Iran.