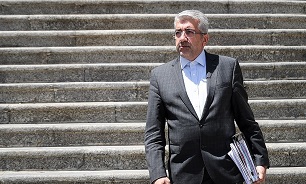 In a meeting with a top German economic delegation, led by former foreign minister of Germany Sigmar Gabriel, held in Tehran on Sunday, Ardekanian said the Iranian administration is determined to increase the country’s generation capacity from renewable energy sources by 3,000 megawatts until 2021.

“German companies could cooperate (with Iran) in this regard,” the minister added.

Hoping for the removal of obstacles to economic and trade ties between Tehran and Berlin, Ardekanian said the visit by the German delegation sends a clear signal from Germany that there is willingness for economic cooperation with Iran.

For his part, Gabriel said Germany is not satisfied with the current level of trade interaction with Iran, hoping that the visit would mark a milestone for the enhancement of bilateral relations.

Gabriel is in Iran with a German economic delegation comprising directors of several major German companies.

Europeans are striving to maintain trade ties with Iran and avert the US sanctions against Tehran.

The EU has devised a special purpose vehicle (SPV) -a financial mechanism- to continue trade with Iran and neutralize the US sanctions.