TEHRAN (defapress) - Ukrainian president Petro Poroshenko has warned of the threat of “full-scale war” with Russia as tensions escalated between the two countries over the detention of Ukrainian navy vessels in the Kerch Strait.
News ID: 73994 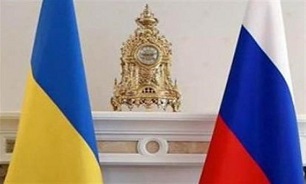 The president told national television on Tuesday: “I don’t want anyone to think this is fun and games. Ukraine is under threat of full-scale war with Russia.”

The diplomatic fallout continued, with US President Donald Trump warning he might cancel a long-awaited meeting with Vladimir Putin at the G20 summit in Buenos Aires this week. He told the Washington Post it would depend on the results of a report about the incident.

“Maybe I won’t have the meeting,” he said, The Guardian reported.

Meanwhile, a court in Crimea has ordered the Ukrainian sailors captured by Russia at the weekend to be detained for two months.

Twelve of the 24 sailors being held by Moscow were ordered to be held in pre-trial detention for two months by a court in the city of Simferopol in Crimea, the peninsula annexed by Russia in 2014. More are to appear before the court on Wednesday.

The sailors face a charge of illegally crossing Russian borders, which carries a sentence of up to six years in prison, according to an investigator quoted by Russian news agencies.

Russian border forces fired on and seized three Ukrainian ships in the Kerch strait, which separates Crimea from the Russian mainland, on Sunday. At least three sailors were wounded. Ukraine says they were travelling in shared waters on a routine passage to the Sea of Azov, which they have a right to patrol under a bilateral treaty.

The crisis between the two countries has provoked international condemnation and talk of fresh western sanctions against Moscow.

Russian state television broadcast interrogations with three of the sailors on Tuesday, eliciting confessions that appeared to be made under duress. “I recognize that the actions of the ships with military hardware of Ukraine’s navy had a provocative character,” said one of the sailors, who identified himself as Vladimir Lisov. “I was carrying out an order.”

Kiev denounced what it described as forced confessions. Ukraine’s foreign minister, Pavlo Klimkin, told the Associated Press that he had asked the president of the International Committee of the Red Cross to arrange a visit to the prisoners and that he was waiting for a Russian response. “It’s not a political issue here, because we can have an argument about the legal status, but it’s about simply concentrating on protecting them and helping them,” he said.

On Monday evening, the Ukrainian government declared martial law in some border regions and the country’s president, Petro Poroshenko, said there was an “extremely serious” threat of a Russian land invasion.

Dmitry Peskov, a spokesman for the Russian president, Vladimir Putin, told reporters on Tuesday that the incident might trigger a flare-up in hostilities in eastern Ukraine.

Russia has been building up its naval presence and seeking to restrict Ukrainian access since completing a bridge across the strait in May. The Ukrainian government released video footage of one of its ships being rammed by a Russian vessel. On Tuesday, two Russian police officers with automatic rifles stood on the pier where the Ukrainian vessels were moored in Kerch, Reuters reported. The vessels bore traces of collisions, with big holes in their hulls.

Ukrainian troops have been fighting Russian-backed separatists in eastern Ukraine since 2014 but the hostilities have largely subsided since a truce was signed in 2015.

Senior politicians from Germany, Austria, Poland and Estonia raised the possibility of new EU sanctions against Russia to punish it for the Kerch incident, which the west fears could ignite a wider conflict.

The United Nations secretary general, Antonio Guterres, had urged Russia and Ukraine to use “maximum restraint” and avoid further escalation, his spokesman said in a statement.

Guterres said he was “greatly concerned” about the incident and called on “both parties to exercise maximum restraint and to take steps without delay to contain this incident and reduce tensions”.

The German chancellor, Angela Merkel, spoke to Putin on Monday and stressed the need for de-escalation and dialogue, her spokesman said.