Plane crashes in west of Tehran

TEHRAN(defapress)– A cargo plane bound for Iran's Payam International Airport in the city of Karaj west of Tehran, from the Kyrgyzstan capital of Bishkek crashed on Monday, an informed official said on Monday.
News ID: 74962 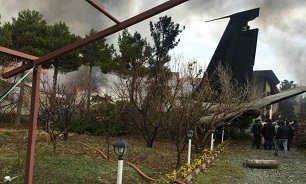 An official of Iran Civil Aviation Organization (CAO) said on condition of anonymity that the Boeing-707 was mistakenly landed at Fath Airport in Karaj, while the pilot could not control the plane on the runway.

The pilot was not able to control the plane while boarding the Fath Airport runway and the plane caught fire after hitting the walls of the airport in the vicinity of a residential area, the official added.