TEHRAN (defapress) – Iran’s top diplomat and the secretary general of the Patriotic Union of Kurdistan explored avenues for the expansion of relations between the Islamic Republic and the Iraqi Kurdistan region in various fields.
News ID: 75008 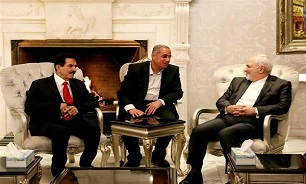 During a visit to the city of Sulaymaniyah in Iraqi Kurdistan on Tuesday, Iranian Foreign Minister Mohammad Javad Zarif had a meeting with Secretary General of the Patriotic Union of Kurdistan Kosrat Rasul Ali.

In the gathering, Zarif paid tribute to Jalal Talabani, the late former president of Iraq, for his role in strengthening Iraq’s national unity of Iraq and the unity of the Kurdistan Region.

Zarif and Rasul Ali also voiced support for efforts to boost economic and trade relations between Sulaymaniyah and Tehran, and for the plans by the private sectors and entrepreneurs of the two sides for closer cooperation.

They further discussed the latest developments in Syria, with both emphasizing the need for a political solution to the conflicts in the Arab country.

Zarif, who arrived in Baghdad on Sunday and held meetings with senior Iraqi officials as well as Kurdish authorities in Erbil, left Sulaymaniyah for the city of Najaf on Tuesday night.

He is scheduled to deliver a speech to a conference on Iran-Iraq economic cooperation in Karbala on Wednesday morning.