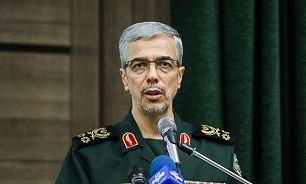 Chief of General Staff of Iranian Armed Forces Major General Mohammad Bagheri made the remark in a national conference on Tuesday.

“Some of our aircraft, including Sukhoi Su-22 and Su-25, were overhauled [by Iranian experts], and used by our brothers in Iraq to combat terrorism,” he said.

Bagheri maintained that the United States has made a multi-million investment in its armed forces, and even that has no solid plan; “they squandered 7,000 billion dollars in West Asia, and their current president finds all those expenses a total waste,” he added.

“Saudi Arabia, the Zionist regime, and some other countries spend hundreds of millions of dollars on their armed forces, and their only objective is to oppose Islam,” he noted.

“Iran’s 7 or 8 billion dollars expenditure on its armed forces is by no means comparable to those other countries’ expenses,” Bagheri said.

The chief of staff further maintained that Iran produces over 90% of its required equipment, and over 500 domestically-manufactured products are currently on display at a defense equipment exhibition.