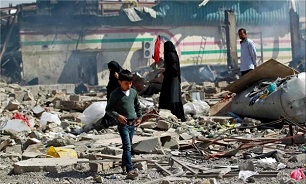 Speaking on condition of anonymity, two officials told the Associated Press news agency on Thursday that Rabat had also recalled its ambassador to the kingdom.

The officials did not elaborate, simply saying Morocco was not taking part in any military interventions or ministerial meetings with the coalition.

In an interview with Al-Jazeera last month, Moroccan Foreign Minister Nasser Bourita attributed Rabat's decision to "developments on the ground" in Yemen, "especially in regards to the humanitarian situation".

Rabat had already scaled down its participation in coalition activities in May of 2015 after a Moroccan F-16 fighter jet was reportedly shot down by Ansarullah forces.

Official UN figures say that more than 10,000 people have been killed in Yemen since the Saudi-led bombing campaign began in March 2015. But the Armed Conflict Location & Event Data Project (ACLED) believes that at least 56,000 people have lost their lives in the war. The violence has also left around two-thirds of Yemen’s population of 27 million relying on aid amid an ongoing strict naval and aerial blockade. According to the world body, Yemen is suffering from the most severe famine in more than 100 years.

Yemen is the world’s largest humanitarian crisis with more than 22 million people in need and is seeing a spike in needs, fuelled by ongoing conflict, a collapsing economy and diminished social services and livelihoods.

an Oxfam representative stated that the US, UK, and French governments are behind millions of people starving in Yemen because they are “supporting this war".