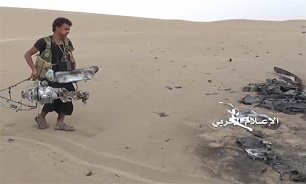 The Saudi UAV (Unmanned aerial vehicle) was shot down on Friday by the Yemeni Ansarullah and Air Defense forces in Kilo-16 area, which links Sana'a, Hudaydah and Taiz.

According to Al-Masirah TV network, this was the third Saudi-operated reconnaissance drone that was destroyed by Yemeni forces during past week.