Liberation of Idlib from Terrorism Inevitable

TEHRAN (defapress) - Syrian President’s Political and Media Adviser Bouthaina Shaaban stated that the liberation of Idlib from terrorism is inevitable for the country’s leadership.
News ID: 75770 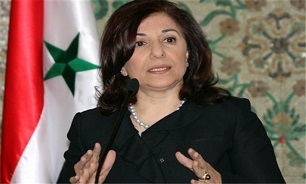 In an interview with al-Mayadeen TV on Thursday, Shaaban said the Syrian Arab people who made sacrifices will not allow anyone to interfere in their internal affairs or change its national identity, adding that every inch of the Syrian territory will be restored, SANA reported.

Commenting on the situation in Idlib, Shaaban said terrorism cannot be tolerated in the province forever and should be brought to an end, stressing that the liberation of Idlib from terrorism is inevitable for the Syrian leadership in coordination with the Russian ally.

Shaaban pointed out that the Turkish regime has not committed to the agreement on Idlib that was reached on the 17th of last September in Sochi, adding that Recep Tayyip Erdogan is trying to play other cards because he has failed in establishing a so-called “safe zone” he talked about.

On dialogue with the Syrian Kurds, Shaaban affirmed that doors are open for dialogue and that the Kurds are a main part of the Syrian fabric, noting that the majority of the Kurds want for the unity and national sovereignty of the country to be preserved.

Moscow believed that the 15-20 kilometer buffer zone would help stop attacks from Idlib-based militants on Syrian army positions and Russia's military bases in the flashpoint region.