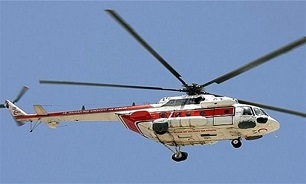 Head of the province’s Crisis Management Department Sattar Farhadi told Tasnim that the helicopter was trying to airlift a patient from an impassable village, but did not make it to the location on Monday.

He added that three of the five aboard were flight crew and two were rescue workers.

In April 2018, another Iranian rescue helicopter crashed in the Persian Gulf while flying from an offshore rig toward Kish Island with five people on board.