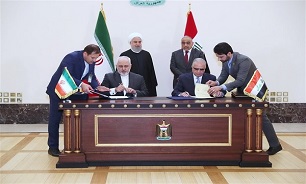 In a meeting co-chaired by Rouhani and Prime Minister of Iraq Adil Abdul-Mahdi in Baghdad on Monday evening, top officials from the two countries signed five memoranda of understanding.

The documents entail cooperation between Iran and Iraq concerning the Basra-Shalamcheh railroad project, visa facilitation for investors, cooperation in the health sector, and agreements between the Ministry of Industry, Mines and Trade of Iran and Ministry of Trade of Iraq, and another one in the field of oil between the petroleum ministries of the two countries.