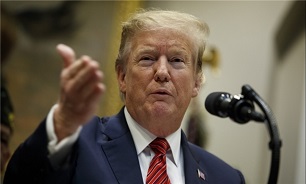 Senators voted 59-41 to pass the resolution of disapproval blocking Trump’s declaration, while the measure passed the House last month, 245-182, The Hill reported.

Underscoring the broad base of concern over Trump’s actions within the Republican caucus, 12 GOP senators broke rank and voted with all the Democrats.

The resolution now heads to Trump’s desk, where he is expected to use the first veto of his presidency to defeat it. Neither chamber has the votes to override the president, who tweeted shortly after the vote was closed: “VETO!”

The American president has not yet officially vetoed the measure, which has not been enrolled and delivered to the White House, but was instead reiterating his plans to do so.

“I look forward to VETOING the just passed Democrat inspired Resolution which would OPEN BORDERS while increasing Crime, Drugs, and Trafficking in our Country,” Trump wrote in a subsequent tweet.

A dozen Republicans broke with Trump and voted with all Democrats to pass the resolution on Thursday, with many lawmakers saying the emergency declaration violated the Constitution’s separation of powers.