No Place for Uninvited Forces in Syria

TEHRAN (defapress) – Chief of Staff of the Iranian Armed Forces Major General Mohammad Hossein Baqeri insisted that the foreign forces stationed in Syria without coordination with the Damascus government should leave the Arab country.
News ID: 76257 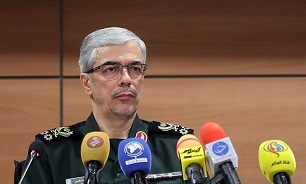 In comments at the beginning of a visit to Syria on Sunday, Major General Baqeri said he has travelled to Damascus for a trilateral meeting of Iran, Syria and Iraq.

The top Iranian commander said one of the main issues to be emphasized in the meeting is that “the forces that are present in Syria without coordination with its government will be leaving the Syrian soil sooner or later.”

Denouncing the “illegal” presence of foreign forces in Syria’s Idlib and eastern side of the Euphrates, the top commander underscored, “These forces should leave those regions as soon as possible.”

He further noted that the trilateral meeting of commanders would revolve around coordination among Tehran, Damascus and Baghdad in the fight against terrorism.