TEHRAN (defapress)- Iranian President Hassan Rouhani, in phone conversations on Thursday, extended greetings to senior officials and clerics of the country on the advent of the Persian New Year whose first day is called Nowruz.
News ID: 76297 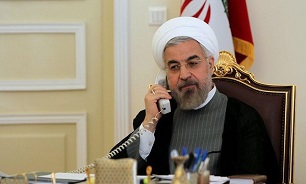 “The Government has been offering services to people with its full power and will continue to do its duties with new plans and decisions in the New Year as well,” the President told the Leader.

Wishing more success for the government to serve the great Iranian nation, the grand ayatollahs also congratulated the New Year to President Rouhani and appreciated the government’s hard work in serving the people.

Also today, Rouhani cabled separate messages to the leaders and heads of states in those countries of the region which celebrate traditional Nowruz rituals, wishing for the nations’ success and prosperity in the New Year on the Persian Calendar.

In the messages, the Iranian president voiced hope for a year of serenity, kindness, and prosperity, adding, “I hope that we, too, as statesmen, will be able to bring peace and unbreakable unity among nations with the arrival of the spring, and gift our people more prosperity and advancement.”

Rouhani further wished the people of regional countries a year full of hope, happiness and success.

Nowruz, which coincides with the first day of spring on the solar calendar (this year started on March 21), is mostly celebrated in Iran, Afghanistan, Azerbaijan, India, Kyrgyzstan, Tajikistan, Pakistan, Turkey and Uzbekistan.

The International Day of Nowruz was registered on the UNESCO List of the Intangible Cultural Heritage of Humanity on February 23, 2010.

For Iranians, Nowruz is a celebration of renewal and change, a time to visit relatives and friends, and pay respect to senior family members.