US Blacklisting of IRGC to Plunge Region into New Crises, Iraq’s Hakim Warns 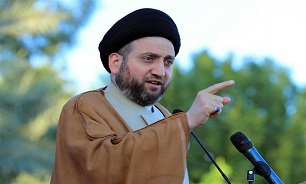 “The White House's move to include the IRGC on the list of terrorist groups is a rash action that complicates the crisis and turns it into an unbreakable knot,” Hakim said, according to a statement released by his office.

"We, once again, call on all parties to use civilized ways to resolve disputes through dialogue,” the Iraqi politician added.

He further warned that such moves by the US would plunge the “flammable” region to new crises that would threaten the security and stability of the regional nations.

The Trump administration on Monday labeled IRGC as a “terrorist group” at the behest of Israeli Prime Minister Benjamin Netanyahu.

Israelis headed to the polls on Tuesday to elect the 120 members of the 21st Knesset (parliament). On the eve of the vote, Netanyahu took credit for Trump’s decision to blacklist IRGC.

“Thank you, my dear friend, President Donald Trump,” Netanyahu tweeted in Hebrew, “for answering another one of my important requests.”