TEHRAN (defapress) – The Islamic Revolution Guards Corps (IRGC) Ground Force’s equipment has been concentrated in oil-rich Khuzestan to deal with floods as some cities of the southwestern province were put on flood alert, the commander of the force said.
News ID: 76739 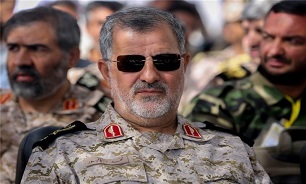 In remarks on Thursday, Brigadier General Mohammad Pakpour pointed to the relief and rescue operations carried out by the IRGC Ground Force in Khuzestan and said its facilities and equipment have been concentrated in the province to counter floods.

“Engineering groups, field hospitals, and needed equipment, etc. are in Khuzestan Province to deal with floods,” he added.

Pakpour further hailed the people of the province as selfless and said the IRGC’s duty is to serve the “dear people”.

Residents from inundated areas of Ahvaz, capital of Khuzestan, were evacuated on Wednesday as the nationwide death toll from the worst flooding in 70 years reached 77.

Further districts of Ahvaz were put on flood alert, according to the provincial governor, as more torrential rain was forecast in coming days.

Amid unprecedented torrential rains in northern, western and southwestern Iran, the military forces have mobilized efforts to help people trapped in the flood-affected areas and evacuate residents in the regions with an emergency situation.