TEHRAN (defapress) – The opening ceremony of the Iranian Trade Center was held in Baku on Friday with high-ranking officials of the two countries in attendance.
News ID: 76925 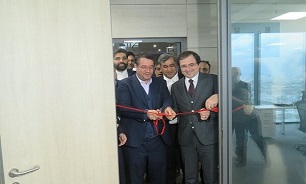 The purpose of the trade center is to support trade relations between the businessmen of the two countries and help them solve their problems.

Businessmen of both countries hope that the opening of this center would enhance bilateral trades.

Heading a delegation, the Iranian minister arrived at Baku for a two-day visit.