Pak ex-envoy urges solidarity with Iran on US IRGC choice

TEHRAN(defapress)-- Former Pakistani ambassador to Iran urges his government to express solidarity with Iran against the US decision on IRGC adding the move is a wrong precedent in the conduct of international relations.
News ID: 76935 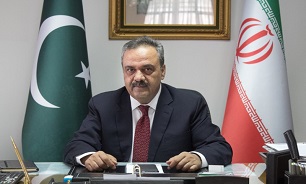 Asif Durrani in his article published in daily Morning Mail said American decision smacks of duplicity as earlier President Trump had praised for the IRGC for “killing Daesh in Iraq and Syria”.

He said Prime Minister Imran Khan’s visit to Iran from 21-22 April assumes importance due to emerging situation in the region. Former envoy said the visit is a reflection of deep-rooted relationship which the two countries enjoy.

He said the visit aims at reassuring the leadership in Iran that Pakistan values friendship with Iran, and that its relationship with Saudi Arabia and other Persian Gulf states would not be at the cost of its relations with Iran.

He was of the view that being neighbors we should conduct our normal trade with Iran; Turkey has refused to bow under America pressure and has wowed to raise the current level of bilateral trade with Iran from $10 billion to $30 billion in the next five years.

The analyst said finalization of Free Trade Agreement (FTA) which has entered the final stages of negotiations needs to be looked into at the apex level.

“Hopefully, Prime Minister Khan’s visit would provide the opportunity to both the countries to find a way out to enhance trade, preferably through currency swap which has been followed by China, India and Japan,” Asif Durrani hoped.

He added opening of additional border points between Iran and Pakistan would not only give boost to bilateral trade but also generate better economic and job opportunities for the people on both sides of the border.

The expert said Iran’s participation in the China-Pakistan Economic Corridor (CPEC) project would be another major issue of interest for both Iran and Pakistan.

He was of the view that the two countries may also discuss initiation of ferry service between Karachi-Gwadar-Chabahar to promote trade and people to people interaction. “In fact, Gwadar and Chabahar can complement each other in trade and ferry services,” he noted.