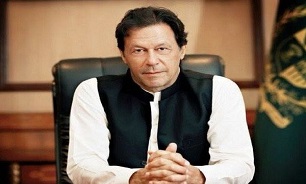 He made the remarks at the “Belt and Road” forum in Beijing, China.

“Any incident in Afghanistan will affect the border areas of Pakistan too. Pakistan is seeking for a quiet area and in this regard needs to cooperate with Iran,” he added.

Iran and Pakistan have suffered the most amount of losses because of insecurity in Afghanistan, he said, adding that one of the common goals of the two countries could be close cooperation for establishing stability in Afghanistan.

He noted that economic prosperity in Pakistan will not be achieved in the absence of stability and security in the region.

He also highlighted his country's resolve to prevent militant groups from carrying out terrorist acts against other countries from the Pakistani soil.

In the same vein, Rouhani announced the signing of an agreement on the formation of a rapid reaction force to confront the terrorist groups between Tehran and Islamabad.

Khan’s visit to Tehran on April 22 came at a critical time when the two sides can take advantage of vast opportunities to enhance bilateral cooperation in various fields. Imran Khan’s official visit to Iran was to fortify Pakistan-Iran relations and call for unity between the two countries. He had formal meetings with Leader of Islamic Revolution Ayatollah Seyyed Ali Khamenei, President Hassan Rouhani and a number of other senior officials and businesspersons.