TEHRAN (defapress)- The Syrian Army dispatched a large military convoy to deploy troops and equipment in different parts of Northern Hama as the terrorists intensified their attacks from the demilitarized zone and Ankara defies its terms under the Sochi Agreement.
News ID: 77130 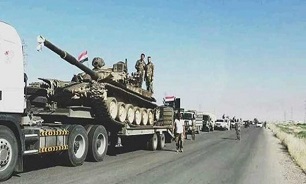 The Arabic-language version of Russian Sputnik news agency quoted a Syrian military source as saying that the Syrian Army has sent massive military equipment to different regions in Northern Hama along the borders with the demilitarized zone.

It noted that the dispatch of military hardware and equipment have taken place in line with the Syrian Army's preparations for cleansing the region and restoring security to the towns of al-Saqilbieh, Mahradeh, al-Azizieh, al-Rasif and several towns bordering contact lines in Northern and Northwestern Hama.

The Sputnik noted that the terrorists' attacks on the Syrian Army's military points and safe zones in Northern Syria have been continuing in recent weeks.

The Arabic-language Al-Watan newspaper quoted Ankara-backed terrorists as saying that Turkey has completely abandoned the Sochi agreement by refraining from implementing it.

It pointed to Ankara's attempts to persuade Tahrir al-Sham terrorists to reinforce its military positions in the demilitarized zone and lack of commitment to the Sochi agreement, and said that Ankara has been involved in a recent move by the militants who blocked patrols by Russian and Turkish troops in Hama.

In a relevant development on Monday, pro-militant media reports said that the Turkey-backed terrorists blocked a strategic highway in Northern Syria in contravention to the implementation of the Sochi Agreement.

The Ankara-backed Jeish al-Izza militant group closed the Idlib-Hama Highway and prevented patrols by the Turkish and Russian troops in the region, the media reports said.

The reports quoted Jeish al-Izza Commander Mostafa Ma'arati as saying that his militants have prevented the Russian troops from entering the areas under their control, warning that they will come under fire.

They also reiterated that Jeish al-Izza has reinforced its military positions in areas along the highway and they have prepared for attacking the military points and centers of the Russian Army.

The Arabic-language al-Watan newspaper quoted Spokesman of Ankara-backed National Liberation Front (NFL) Mostafa Naji as saying that they will not allow the Russian troops to enter the areas under their control and also their contact lines with the Syrian Army.

In a relevant development earlier in April, a Syrian newspaper reported that Turkey intends to delay implementation of the Sochi agreement in a bid to keep Tahrir al-Sham al-Hay'at (the Levant Liberation Board or the Al-Nusra Front) terrorists in Idlib province.

Ankara has failed to implement the Sochi agreement after nearly six months since the deal was reached between Turkey and Russia, the Arabic-language al-Watan newspaper reported.

The Turkish Army has so far focused its efforts on merger of Tahrir al-Sham al-Hay'at and the NFL.

Al-Watan newspaper quoted some military experts as saying that Ankara has not contained the terrorists and done nothing to force them to pull their heavy weapons from the demilitarized zone specified under the Sochi Agreement.

They said that Turkey which has established 12 observation points to monitor the terrorist groups and deter their operations has deliberately delayed implementation of the Sochi agreement to strengthen Tahrir al-Sham terrorists in Idlib and its countryside.

The military experts said that Turkey has also launched 18 patrol posts in the demilitarized zone, but terrorists still feel unimpeded to continue attacks on the Syrian Army.

In late February, Arab media reports said that the Turkish intelligence officials and commanders of Tahrir al-Sham al-Hay'at have been meeting on protecting and keeping the terrorist group in Idlib province.

Al-Watan newspaper quoted sources close to the militants as saying that Ankara has set conditions for supporting Tahrir al-Sham and its continued control over Idlib, saying that they should follow Ikhwan al-Muslimoun (Muslim Brotherhood) approach.

They added that the two sides have reached an agreement that includes a shift of approach by Tahrir al-Sham. "In return Turkey has promised the terrorist group that it will prolong the demilitarized zone agreement as long as possible, will not participate in any joint military operations against Tahrir al-Sham and will try to prevent such operations."

The paper also referred to the Syrian army's airstrikes against the terrorists in Northern and Northwestern Hama and Southeastern Idlib in response to their attacks, raising the possibility that military operations in Idlib would soon start.

The Turkish army has in recent days sent over 20 vehicles, carrying soldiers, military equipment and prefabricated houses to Northern Hama and Southern Idlib to strengthen its occupied points in Northern Syria in regions near the areas occupied by Tahrir al-Sham terrorists.

Media reports said earlier that Turkey was trying hard to keep Tahrir al-Sham al-Hay'at in Syria's Idlib province and block the implementation of upcoming military operations against the terrorist group by changing its name.

Al-Watan newspaper quoted local sources and some sources close to Ankara-backed militants in Idlib as saying that despite President Recep Tayyip Erdogan's recent statements on the possibility of Turkish Army's cooperation in Idlib military operations, Ankara is strongly looking for changing Tahrir al-Sham's face with the aim of blocking military operations against the terrorist group in Northern Syria.

The sources also said that the Turkish government intended to change the situation in Idlib province to make it similar to the territories occupied by the Turkey-backed Euphrates Shield and Olive Branch forces, plans to open the air space of the regions under Tahrir al-Sham's control to Turkish planes.

The presidents of Russia, Turkey, and Iran held a fourth trilateral meeting on settlement of the Syrian conflict in the Russian resort city of Sochi on Thursday. According to Ankara, the meeting focused on the situation in Idlib.