TEHRAN (defapress)- Recent photos of ISIL ringleader Abu Bakr al-Baghdadi released on the Internet shows that he has been living in a safe area for several years as he has gained a lot of weight, the Arabic-language media reported.
News ID: 77194 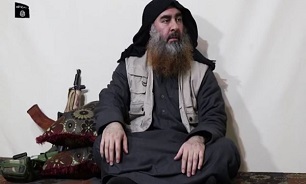 The Arabic-language al-Ahd News Website in a report analyzed a recent video footage of al-Baghdadi, and said that his conditions and his clothing and the way he has dressed shows that he is not on the run.

It noted that after heavy and consecutive defeats of the ISIL terrorist group in Iraq and Syria, releasing the video showed that the second phase of a long-term battle by the ISIL under Washington's leadership has begun.

The al-Ahd further noted that a deeper look at the video footage, specially the movements of al-Baghdadi's hands and head and his way of hiding his looks and the way he avoids looking straight into the cemera, all suggest that the ISIL leader is in a confusing and weakened state.

It, meantime, said that the overweight and the color of his skin clearly show that Al-Baqdadi has not been under any US siege in al-Baqouz region of Syria, but has most likely been kept in a place away from sunlight.

Al-Ahd said that Abu Bakr al-Baghdadi's use of a machine-gun and a box on his side is surely meant to mimic the style of Osama bin Laden in Afghanistan's mountains for the people.

It further noted that given the fact that al-Baghdadi is wearing clothes belonging to Western regions of Iraq and Eastern parts of Syria as well as a rug made in Aleppo factory of Syria which was exported to Iraq until 2013, it can be implied that al-Baghdadi has not left the area stretching from Syria's al-Tanf to Mosul of Iraq which is an area protected by the US.

Al-Ahd also pointed to ISIL's access to high-quality video and audio techniques, and said that the video image has been released in line with the US efforts to pretend that the terrorist organization is still threatening Iraq and Syria and the presence of the US-led coalition forces is still needed in these countries.

In a relevant development on Thursday, a senior Iraqi military source in al-Anbar said that the US forces deployed in the Western parts of the province are aware of ISIL ringleader Abu Bakr al-Baghdadi's whereabouts, moves and hideouts.

The source was quoted by the Arabic-language al-Ma'aloumeh news website as saying on Thursday that the Americans are in possession of all intelligence about al-Baghdadi but refrain from providing them to the Iraqi government in a move to exert pressure on Baghdad to keep the US forces in the country.

He added that ISIL commanders close to al-Baghdadi who had been arrested by the US-backed Syrian Democratic Forces (SDF) have disclosed all intelligence about al-Baghdadi to the Americans.

Meantime, Abbas al-Ardawi, a senior Iraqi security expert, said that al-Baghdadi's reappearance is in line with the US plot to create insecurity in Iraq and keep its forces in the country.

In relevant remarks on Wednesday, another Iraqi expert also said reappearance of al-Baghdadi in front of the cameras after five years was aimed at justifying the US military deployment in Iraq.

Hamad al-Dulaimi told the Arabic-language al-Arabi al-Jadid news website that the Iraqi parties which favored the US continued deployment in Iraq were much likely to make use of al-Baghdadi's move to magnify potential threats by the ISIL.

He added that the US was the first to misuse al-Baghdadi's reemergence politically and as an emphasis on its recent warnings about the danger of ISIL and importance of its forces' presence in Iraq.

Al-Arabi al-Jadid also quoted Iraqi officials as saying that al-Baghdadi had come into sight again as Iraqi security forces were running operations to cleanse Jabal Hamrin mountains and some regions of al-Anbar desert from terrorists, adding that the ISIL cells were now in their weakest conditions since the freedom of Mosul and after they were stranded in desert areas.

Al-Baghdadi in a new video message released after five years threatened to take revenge of the killed and jailed members of the terrorist group.

The ISIL terrorist group released an 18-minute video message of Abu Bakr al-Baghdadi in which he had threatened to continue his terrorist activities.

Al-Baghdadi was seen with three masked militants while the ISIL ringleader pointed to the ISIL's exit from Baqouz region in Eastern Deir Ezzur and reiterated that the Baqouz Battle had ended.

The ISIL ringleader also claimed that the Easter blasts in Sri Lanka had been carried out in line with ISIL's revenge for Baquouz battle.

The newly-released video of Abu Bakr al-Baghdadi was the first since the last one released in Iraqi Mosul's Nour Mosque in 2014.

On Saturday, Russian media reports claimed that al-Baghdadi was in Syria's Badiyeh (desert) region, attempting to cross the border into Iraq.

The Arabic-language service of RT news channel quoted an Iraqi intelligence source as saying that al-Baghdadi was at present hiding in Abu Rajmin mountain near Syria's Palmyra region in Homs province.

He added that the ISIL leader wants to cross the border into Iraq in the next few weeks, noting that he has already made several unsuccessful attempts due to the tight security measures at the border.

The report said captured ISIL terrorists have leaked during interrogations that al-Baghdadi has been left with a small number of Saudi, Tunisian and Iraqi militants who are still loyal to him.

Security experts said al-Baghdadi is likely trying to join the ISIL terrorists who have been transferred by the US from Syria to Iraq.