TEHRAN (defapress) – Prime Iraqi Minister Nouri al-Maliki said on Friday that imposition of economic sanctions against the Muslim nation of Iran is contrary to international laws and norms.
News ID: 77333 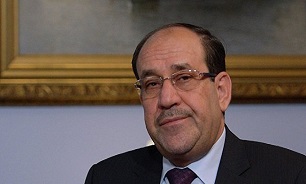 In a Friday statement on his Facebook page, he wrote, "The military escalation in the region, beating war drums, and the wave of confrontation, accompanied by the unilateral imposition of economic sanctions from the [United States] against neighboring Islamic Republic [of Iran] — which is contrary international laws and norms — will create serious repercussions for the Muslim people of Iran and all the people of the region,” Rudaw reported.

The head of State of Law Coalition called on Iran and US to solve their problems through dialogue, noting that the typical victims of this escalation are Iraqis “who have just gotten out from a devastating war against the terrorist organization Daesh [ISIL] whose sleeper cells still threaten the stability and security of Iraq."

Tensions have raised between Tehran and Washington after Trump's administration decision in May 2018 to withdraw from the Nuclear Deal, also known as Joint Comprehensive Plan of Action (JCPOA), and to re-impose sanctions which were lifted after the JCPOA. US pressure campaign on independent Iran doesn't limit to sanctions: it has also put Iran's Islamic Revolutionary Guard Corps (IRGC) in its list of foreign terrorist organization.

Iran, in response, has designated US Central Command (CENTCOM) in the Middle East as a terrorist organization. Also, after one year of patience, Iran decided to reduce some of its commitments under JCPOA, urging other signatories to defend the rights of Iranian people and fight US unilateralism.