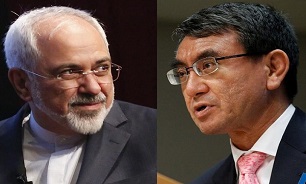 Iran is exercising “maximum restraint in spite of the fact the United States withdrew from (the) JCPOA last May,” Zarif said on Wednesday at the start of his meeting with his Japanese counterpart Taro Kono in Tokyo.

“We believe that escalation (of sanctions) by the United States is unacceptable and uncalled for,” he said, according to Reuters.

Kono, for his part, said it was essential to maintain the nuclear agreement and urged Iran to keep implementing it, echoing other countries.

He also expressed deep concerns over the situation in the Middle East and said, “I will spare no effort to ease tensions and try to resolve outstanding issues.”

Last week, the US deployed warships and warplanes to the Middle East.

Tensions escalated even further after an incident with four tankers off the United Arab Emirates on Sunday, with US investigators reportedly blaming Iran.

No evidence of Iran’s role has emerged and Tehran has called for an investigation.

Iran has condemned the attack as “dreadful” and a lawmaker said Iranian suspicions fell on Israel.