TEHRAN (defapress) – Member of Parliament at the German Bundestag Olaf in der Beek called on moderate approaches by Iran and US while supporting the Iranian nuclear deal.
News ID: 77465 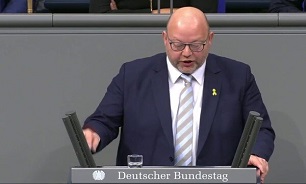 In respect to EU and Germany emphasis on preserving Iran’s Nuclear Deal, Olaf in der Beek, member of the Bundestag, and a member of the German Nuclear Security Commission said that they believe that despite the withdrawal of the US from Iran's nuclear deal, this agreement must be kept alive.

Referring to Iran’s nuclear deal which was the result of long-standing international diplomatic negotiations, he mentioned that Iran’s nuclear deal includes one of the most important issues that has always been addressed and that is the issue of nuclear free Middle East.

German MP noted that the withdrawal of the US from Iran's nuclear deal is regrettable; adding the International Atomic Energy Agency (IAEA) has assessed Iran’s commitment to the agreement by monitoring Iran's nuclear activities.

At the moment, Iran is also obliged to adhere to its commitments and should avoid any more tension by self-restrain, he added.

If Iran can build trust in respect to the regional issues such as Syria and the Hezbollah in Lebanon, German and EU will also help end Iran's political and economic, he stressed.

Regarding to US National Security Adviser John Bolton’s claim on necessity of military action against Iran, In der Beek, a member of the Free Democratic Party in Germany said that they, the German Democrats Liberals call both Iran and US to prevent any tensions by moderation.

Stating that unfortunately there is a risk of armed conflict, he said diplomatic efforts should help to resolve the issue.

They, the German Democrats Liberals, support the German Foreign Ministry and the EU to prevent any military action against Iran and conduct diplomatic talks and consultations, German MP said.