TEHRAN (defapress)- A senior Ansarullah official stated that Yemen has resumed its retaliatory drone attacks deep inside Saudi Arabia in response to the kingdom's spurning of “peace initiatives” sponsored by the United Nations.
News ID: 77565 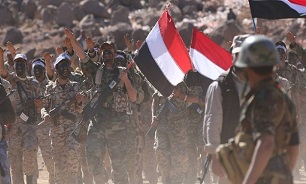 The Houthi movement had agreed to halt strikes last year “in good faith” and was ready to take more steps, “but unfortunately the aggressor countries misinterpreted these efforts (as weakness) and regarded them with contempt and indifference”, Mohammad Ali al-Houthi, the chairman of the Supreme Revolutionary Committee of Yemen, told Reuters news agency.

Houthi further dismissed Saudi allegations that the drone strikes had been carried out on Iran's orders, adding, “We are independent in our decisions and ... we are not subordinated to anyone."

He pointed out that Yemeni forces had unilaterally withdrawn from three Red Sea ports, and criticized Saudi Arabia and its mercenaries for their failure to do so.

The movement, which has been significantly helping the Yemeni army against a Saudi war for the past four years, signed a UN-brokered truce deal with the Saudi side in Stockholm in December.

According to the agreement, Houthi fighters and Saudi mercenaries must withdraw from three ports in Yemen, particularly Hudaydah, through which more than 70 percent of Yemen’s imports are made.

Over the past week, Yemeni fighters have launched three drone attacks on the airport in Saudi Arabia’s Southern Najran region. A US-made Patriot missile battery at the airport was also targeted in the attacks.

Yemeni soldiers, backed by allied fighters from Popular Committees, have also launched a major operation against the strategic oil facility in Saudi Arabia in retaliation for the Riyadh regime’s devastating military aggression and siege of the impoverished country. Following the attack, Saudi Arabia stopped pumping crude oil on the major pipeline across the country. The retaliatory attack also led to the rise of oil prices and fall of stock markets in Persian Gulf Arab countries.

The attack bears extra significance at this stage of the war because the Yemeni forces could fly armed drones so far and carry out precision strikes and then fly them back while evading all Saudi defenses on the way. The long-range drones open unlimited possibilities for Yemeni resistance forces, which have already surpassed all expectations by surviving the massive Saudi onslaught and mounted a potent response with an arsenal of ballistic missiles.

Yemen's Ansarullah movement has warned that its recent attack on a major Saudi oil facility was the start of operations against 300 vital targets in Saudi Arabia and the UAE.

The Ansarullah said its drone attack on pumping stations of the Saudi state oil company Aramco was the start of operations against 300 vital targets. The group added that other planned targets include military headquarters and facilities in Saudi Arabia and the United Arab Emirates.

According to a December 2018 report by the Armed Conflict Location and Event Data Project (ACLED), a nonprofit conflict-research organization, the Saudi-led war has claimed the lives of over 60,000 Yemenis since January 2016.

France, the United States, the Uinted Kingdom and some other Western countries have faced criticisms over arms sales to the Saudi Arabia and the UAE, whose aggression against Yemen has affected 28 million people and caused what the United Nations calls “one of the worst humanitarian crises in the world". According to the world body, Yemen is suffering from the most severe famine in more than 100 years.