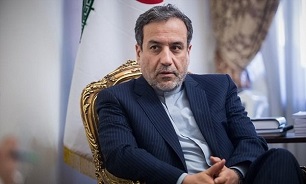 During the meeting in Masqat on Sunday, Araqchi warned of the US and its allies' sabotage measures, and said that Iran is ready for establishing balanced relations with all regional countries in the Persian Gulf based on mutual respect.

He referred to the failure of sanctions policy against Iran, and noted that Tehran does not seek tensions in the region.

Araqchi also rejected any type of direct or indirect talks with the US.

Bin Alawi, for his part, urged all sides to exercise restraint, calling for continued consultations between the two countries' officials.

In relevant remarks on Sunday, Iranian Foreign Ministry Spokesman Seyed Abbas Mousavi dismissed claims by a Kuwaiti official on the start of talks between Tehran and Washington.

"There are no direct or indirect talks between Iran and the US," Mousavi stressed.

Iranian officials have repeatedly underscored that Tehran would never sit to the negotiating table with Washington.

Iran's Supreme Leader Ayatollah Seyed Ali Khamenei told a gathering of senior Iranian officials that he saw no possibility of war between Tehran and Washington, adding that the recent US military buildup in the region only aimed at frightening Iran to yield to the White House demands, but Iran stands strong.

Addressing the heads of the country’s executive, judiciary, and legislative branches as well as other senior officials, parliamentarians, and important figures in the country’s political, social, and cultural spheres earlier this month, Ayatollah Khamenei ruled out the possibility of war between the United States and Iran despite heightened tensions between the two sides, saying Washington knows engaging in such a conflict would not be in its interest.