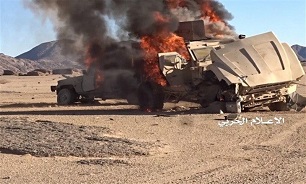 In an operation mounted near the Alab crossing in Asir, the Yemeni forces destroyed the Saudi armored vehicles and managed to clean up the area from the aggressors, the Arabic-language al-Masirah reported.

A military source said that during the operation, a number of Saudi mercenaries were killed and some others were injured.

The Yemeni troops also pounded gatherings of Riyadh-backed militants in al-Jawf province with several Katyusha rockets, according to the report.