TEHRAN (defapress) – Tha Qatari foreign minister said on Sunday his country rejects the anti-Iran statements of the recent summits in Mecca as they had been prepared in advance without consulting with Doha.
News ID: 77639 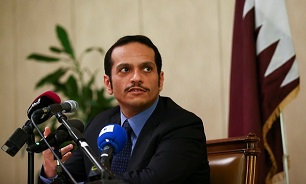 "The statements of the [Persian] Gulf and Arab summits were ready in advance and we were not consulted on them," Mohammed bin Abdulrahman Al Thani told the Al-Araby broadcaster.

"Qatar has reservations on the Arab and [Persian] Gulf summits because some of their terms are contrary to Doha's foreign policy," he added.

"We hoped the Mecca summits would lay the groundwork for dialogue to reduce tensions with Iran," the top diplomat said in comments reposted on Twitter by his ministry.

"The Mecca summit ignored the important issues in the region, such as the Palestine issue and the war in Libya and Yemen," he went on to say.

Qatar is not the first Arab state to reject the final statements of the emergency meetings in Mecca. Following the talks, Iraq also opposed the communiqué issued by the Arab participants.

Iraq, which maintains close ties with neighboring Iran and has strong ties with Washington as well, objected to the communiqué, which required "non-interference in other countries" as a pre-condition for cooperation with Tehran.

Iraqi President Barham Salih asked the gathering to support his country's stability, arguing that rising tensions with Iran could cause war. He voiced hope that Iran's security would not be targeted.

"The Islamic Republic of Iran is a Muslim country that is a neighbor to Iraq and Arabs. It is certain that we do not wish the security of Iran to be targeted. We share a common border that is 1,400 km long and a long history and relations, and it is also certain that the security of a fellow Islamic country is in the interest of Arab and Islamic countries. The region needs stability based on a mechanism of joint security that guarantees non-interference in internal affairs and the rejection of violence and extremism," he added.

The statements mainly cited concerns about the recent sabotage attacks against several ships off the UAE. Both Saudi and Emirati officials have blamed the mysterious "sabotage" attacks on Iran while Iran has strongly denied any involvement, and offered to sign non-aggression pacts with the Persian Gulf Arab states.