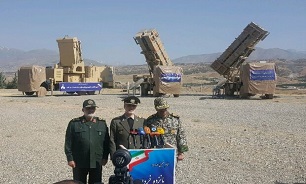 The homegrown system was unveiled and delivered to the Army Air Defense Force on Sunday, in a ceremony attended by Defense Minister Brigadier General Amir Hatami.

Elaborating on the features of the new system, Brigadier General Hatami said, "the '15th of Khordad' which has been designed and developed by domestic experts can simultaneously intercept and take action against six targets."

"It can also be prepared for operation in less than five minutes."

The new system, which uses the homegrown Sayyad-3 missile, can track targets such as jet fighters and combat drones within a range of 150 kilometers and intercept them within a 120km range, he added.

The '15th of Khordad' can also intercept stealth targets within a range of 85km, and destroy them in a 45km range.

Iranian military experts and technicians have in recent years made great headways in manufacturing a broad range of indigenous equipment, making the armed forces mostly self-sufficient in the arms sphere.

Iran has also conducted major military drills to enhance the defense capabilities of its armed forces and to test modern military tactics and state-of-the-art army equipment.