If US Introduces Sanctions Against Turkey over S-400 Deal, Ankara Will Retaliate 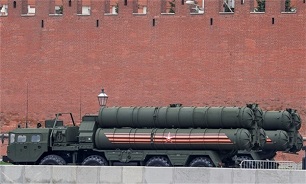 "One country cannot give instructions to another on how to act. The US should abandon this behaviour. Everyone is concerned about this. How far can it go? If the US takes steps against us, then we will be forced to take reciprocal steps", he stated in an interview with the channel NTV.

The foreign minister earlier stated that "nobody" is in a position to issue Turkey ultimatums regarding its policy.

Cavusoglu's remarks come shortly after Turkish Presidential Spokesman Ibrahim Kalin slammed a letter by US Acting Secretary of Defence Patrick Shanahan to the Turkish Defence Minister that reportedly contains threats to remove Ankara from the F-35 pilot training programme over the S-400 deal.

"This letter contradicts the spirit of allied relations. Simultaneously with the sending of the letter, its content was disclosed to media. This is unacceptable for serious state affairs... Everyone must be sure that we will respond. The presidents of Turkey and the United States will discuss the issue of our F-35 trainees at a meeting on the sidelines of the G20 summit in Japan on 29 June", Kalin said of the letter, seen by the magazine Foreign Policy.

The Turkish side has consistently refused to bow to US threats over the S-400 deal, insisting that the purchase of those weapons is its sovereign affair, and has ruled out the possibility of abandoning plans to complete the acquisition.

In late May, US State Department Spokesperson Morgan Ortagus announced in a statement that Turkey's acquisition of Russia's S-400 would have "very real and very negative consequences".

Washington has, on a multitude of occasions, claimed that the S-400s are incompatible with NATO military equipment and alleged that the Russian air defense systems pose a threat to F-35 fighter jets.

Ankara has, in turn, stressed that the S-400s are not connected in any way to the security of NATO, the US or the F-35s, and the decision to acquire them "does not target a third country".

As Turkey has consistently refused to abandon the deal, Washington has threatened to withhold the sale of the stealth fighters to Ankara, or to slap it with sanctions under the 2017 Countering America’s Adversaries Through Sanctions Act (CAATSA).

Russia and Turkey signed a $2.5 billion loan agreement for the shipment of a total of four batteries of S-400 systems in December 2017. The first delivery is set for July 2019 and will proceed as scheduled, according to Turkish officials.