Iran Willing to Save JCPOA

TEHRAN (defapress) – Iranian President Hassan Rouhani reiterated Tehran’s willingness to salvage the 2015 nuclear deal, known as the Joint Comprehensive Plan of Action (JCPOA), highlighting the role that China can play in this regard.
News ID: 77795 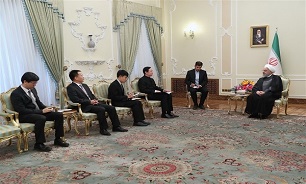 Iran is willing to save the JCPOA, Rouhani said in a meeting with China’s new ambassador to Iran, Chang Hua, held in Tehran on Monday.

“The role of China in this regard is very important, and Beijing can provide considerable help for implementation of commitments of the (JCPOA) parties,” he added.

The president also highlighted Iran and China’s common stances on regional and international matters, saying that Tehran-Beijing ties are not confined to a specific field and that Iran is prepared to boost bilateral relations with China in various arenas.

Preserving independence is very important for both Iran and China, Rouhani stated, adding, “Unilateralism is opposed by both countries and is a wrong and dangerous path for the region and international community.”

“The Islamic Republic of Iran welcomes development of infrastructures for the continuation of strategic and sustainable ties with China,” the president added, pointing to the joint investment and mutual cooperation between the two nations in various fields, such as the energy industry, transportation, railway industry and construction of industrial complexes.

For his part, the new ambassador expressed China’s enthusiasm for “deeper strategic ties” with Iran after submitting his credentials.

He also highlighted Iran’s significant position in the region, adding that China pursues the policy of broadening ties with Iran in cultural and economic areas, such as in trade, energy industry and transportation.

In a meeting in Tehran last week, the Chinese envoy and Iranian Foreign Minister Mohammad Javad Zarif weighed plans to carry out the agreements signed previously between the two countries and promote bilateral cooperation.