Iran Urges World Reaction to US Violation of Airspace 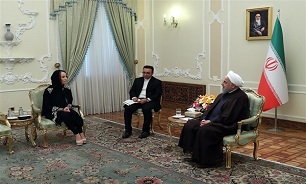 In a Sunday meeting with president of the Inter-Parliamentary Union (IPU) in Tehran, Rouhani denounced the intrusion of a US drone into Iranian airspace as an act of aggression aimed at starting new tension in the region.

“This region is very delicate and security of the Persian Gulf and Sea of Oman waterways is highly significant for many countries. Therefore, we expect all international institutions to show an appropriate reaction to this American aggressive measure,” the president told IPU’s Gabriela Cuevas Barron.

In the early hours of June 20, the Islamic Revolution Guards Corps (IRGC) Aerospace Force shot down a US unmanned aerial vehicle (UAV) that intruded into the airspace of Iran.

Elsewhere in the meeting, Rouhani decried the US for creating a host of troubles in Afghanistan, Iraq, Syria and Yemen over the past 17 years, stressing, “We believe that the security of all world regions and the Persian Gulf must be ensured by regional countries.”

The US policy of bullying, unilateralism, and violation of the international law has caused many regional and international problems, the president added.

“Today, the US has resorted to economic terrorism against the Iranian nation and imposes even medical and food sanctions,” Rouhani deplored.

The president reiterated that Iran pursues the policy of de-escalation, averting military confrontation, and promotion of world peace and stability.

“Terrorism, unilateralism, and environmental problems are the contemporary world’s issues and problems that require further enhancement of parliamentary and international cooperation to be resolved,” Rouhani added.

He also voiced Iran’s willingness to broaden friendly ties with the Latin American nations, including Mexico, saying closer ties between Tehran and Mexico City would serve the interests of both nations.

For her part, the Mexican president of the IPU praised Iran for playing an “important and powerful” role in the peaceful and negotiated settlement of conflicts and in promoting multilateralism.

Gabriela Cuevas Barron also described the 2015 Iran nuclear deal as a good example of multilateralism in the international arena, expressing hope that the EU would immediately fulfill its commitments under the Joint Comprehensive Plan of Action (JCPOA).

She further hailed Iran as a powerful country in the region, saying the world should learn from Iran’s successful experience of dialogue and honor international treaties.

The IPU is an international organization that brings together representatives of parliaments to promote contacts, coordination and exchange of experiences among parliamentarians.

It has standing committees on Peace and International Security, Democracy and Human Rights, United Nations Affairs as well as Sustainable Development, Finance and Trade.