TEHRAN (defapress) – Syrian forces targeted the hideouts of terrorists in the provinces of Idlib and Hama, inflicting major losses on them.
News ID: 77855 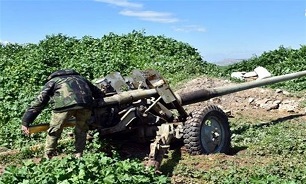 The positions and military equipment, including rocket launchers, belonging to al-Nusra terrorists were hit by the Syrian army in the areas of Maarzeta, Kafrsahna, and Kafrouaid in Idlib’s southern countryside, SANA reported.

In a separate operation in Hama’s northern countryside, Syrian forces targeted movements of al-Nusra terrorists in Tal Melh, Kafrzeta, and al-Latamina, killing and injuring a number of them.

Syrian government forces have managed to liberate almost all the Syrian lands occupied by terrorist outfits.

A de-escalation agreement froze a Syrian offensive to liberate Idlib, where between 10,000 and 15,000 militants are said to be hiding.

Militants have persisted in their stay in the zone, refusing to leave the area while repeatedly violating the ceasefire by staging attacks in the region.