TEHRAN (defapress) - US President Donald Trump and Chinese President Xi Jinping agreed on Saturday to proceed with negotiations after a series of escalations to their nations’ trade war threatened to disrupt the global economy.
News ID: 77912 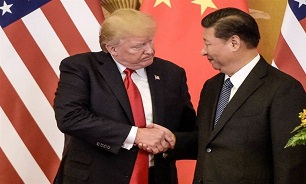 On the sidelines of the Group of 20 summit in Osaka, Japan, the two leaders held a highly anticipated meeting, which Chinese media outlets reported ultimately took about 80 minutes.

Speaking after the bilateral, Trump said it had gone as well as it could have, and that negotiations with China would continue.

“We are back on track,” the US president said.

The Chinese state media, meanwhile, reported the two sides had agreed to resume talks and that the US did not plan to levy any new tariffs on China’s goods at this time.

For one, Chinese state-run press agency Xinhua described the meeting as the presidents agreeing “to restart trade consultations between their countries on the basis of equality and mutual respect.”

The result of the presidents’ talks appeared to align with what many experts predicted ahead of the event. That is, analysts and former diplomats who spoke with CNBC had projected there would be an agreement to temporarily pause any trade war escalation.

Still, markets were on edge about the meeting because Trump himself had suggested that he would be deciding whether to hit China with more punitive trade taxes if he didn’t like what he heard from Xi. On the other hand, there had been sporadic hopes that the meeting could have resulted in the announcement of a framework for some sort of long-term deal.

Saturday’s summit was a continuation of Trump’s years-long crusade to overhaul the US trade relationship with China. He has long accused Beijing of unfair trade practices that sap American manufacturing jobs, and ran for president in 2016 on cracking down on China.

At the outset of the high-stakes talks, Trump said he was open to a trade deal that would be “monumental.”

“I actually think that we were very close and then something happened where it slipped a little bit and now we’re getting a little bit closer,” Trump said on the sidelines of the G-20 meeting.

“I think this will be a very productive meeting and I think we can go on to do something that truly will be monumental,” he added.

Xi, meanwhile, said at the beginning of the meeting that he was ready to exchange views on fundamental issues.

“Forty years on, enormous change has taken place in the international situation and China-US relations, but one basic fact remains unchanged: China and the United States both benefit from cooperation and lose in confrontation,” Xi said.

“Today I’m prepared to exchange views with you on the fundamental issues concerning the growth of China-US relations,” the Chinese leader added.

The commentary ahead of the meeting from Chinese state media suggested the two countries would not have an easy time reaching an agreement. China’s Communist Party-run Global Times said earlier on Saturday the world had to “contain capricious US actions,” pointing to examples like Trump withdrawing from the Paris climate accord.

“The world needs to rein in the US, although it’s difficult,” the paper said in an editorial. “The problem is that many countries have misgivings in expressing their opposition to US bullying tactics out of fear for US power, or hope to profit from the US stirring up the global order through opportunism.”

The Trump-Xi meeting had been deemed a globally significant event because the ongoing trade war has threatened to disrupt many countries’ economies and has roiled businesses’ international supply lines.

OECD Secretary-General Jose Angel Gurria told CNBC on Friday that, if talks between Trump and Xi fell through, that would “be very, very destructive.”

A fallout, he added, “would spill over to practically every single economy in the world ... because (the US and China) have this massive relationship with the rest of the world, you would have this inevitable impact, very negative impact.”

The International Monetary Fund warned in June that the implemented and proposed tariffs between the two countries could potentially cut global economic output by 0.5% in 2020.