TEHRAN (defapress) – The Joint Commission of the 2015 Iran nuclear deal, known as the Joint Comprehensive Plan of Action (JCPOA), described the lifting of sanctions against the Islamic Republic as “an essential part of the agreement”.
News ID: 77913 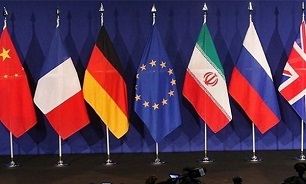 Negotiators from Iran and the Group 4+1 (Russia, China, Britain, France and Germany) convened in the Austrian capital of Vienna on Friday to discuss ways to save the JCPOA following the US moves against the deal.

“In view of recent concerning statements and developments, participants recalled the key importance of continued full and effective implementation of the agreement by all sides,” the JCPOA Joint Commission said in a statement issued at the end of its quarterly meeting.

“At the same time, participants recalled that the lifting of sanctions is an essential part of the agreement and reviewed their respective commitments in this regard,” it added.

The full text of the joint commission’s statement released by EEAS is as follows:

The Joint Commission was chaired, on behalf of the EU High Representative Federica Mogherini, by EEAS Secretary General Helga Schmid and was attended by the E3+2 (China, France, Germany, Russia, United Kingdom) and Iran at the level of Political Directors/ Deputy Foreign Ministers.

JCPOA remains a key element of the global nuclear non-proliferation architecture, endorsed unanimously by UN Security Council Resolution 2231. Furthermore, in light of the recent tensions, its preservation continues to be essential for the regional stability and security.

In view of recent concerning statements and developments, participants recalled the key importance of continued full and effective implementation of the agreement by all sides. At the same time, participants recalled that the lifting of sanctions is an essential part of the agreement and reviewed their respective commitments in this regard. They also took stock of respective efforts aimed at mitigating the negative impact of US withdrawal and re-imposed US sanctions, actions for which they have repeatedly expressed deep regret.

France, Germany and the United Kingdom informed participants that INSTEX had been made operational and available to all EU Member States and that the first transactions are being processed. Ongoing complementary cooperation with the Iranian corresponding entity (STFI), which has already been established, will speed up. They confirmed that some EU Member States were in the process of joining INSTEX as shareholders, the special purpose vehicle aimed at facilitating legitimate business with Iran. They are also working to open INSTEX to economic operators from third countries.

Participants noted good progress, among others, on the modernization of the Arak research reactor, and the stable isotope production project as part of the conversion of the Fordow facility, as foreseen in the JCPOA. They underscored the importance of the projects in terms of nuclear non-proliferation. On Arak, participants particularly welcomed progress made by co-chairs China and the United Kingdom, including the signature of the contract between China and Iran on transient analysis. The Joint Commission reaffirmed its firm commitment to fully support these nuclear projects, including the timely completion of the modernization of the Arak Research Reactor and the supply of necessary equipment. Participants were briefed on the ongoing progress of projects in the area of civil nuclear cooperation under Annex III of the JCPOA.

Participants underlined the key role played by the IAEA, the only impartial body in charge of the monitoring of the implementation by Iran of its nuclear-related commitments under the JCPOA and UN Security Council Resolution 2231 in order to verify the exclusive peaceful nature of the Iranian nuclear program.

As part of the ongoing work on sanctions and nuclear issues, the Joint Commission tasked experts to look into practical solutions in particular for the export of low enriched uranium (LEU) and heavy water under appropriate arrangements. In parallel, they will also continue to intensify efforts as regards sanctions lifting by convening specialized and focused experts discussions in line with the commitments under paragraph 8 of the Joint Statement of the Joint Commission meeting at the ministerial level on 6 July 2018, aimed at providing practical solutions in order to maintain the normalization of trade and economic relations with Iran.

Under the terms of the JCPOA, the Joint Commission remains the relevant forum for dialogue to address all issues of concern.

Participants agreed to keep JCPOA implementation under close review and it was decided to convene the Joint Commission at ministerial level in the near future.