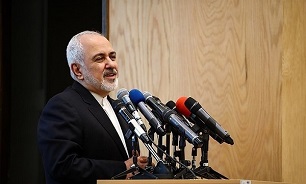 In an address to a conference marking the National Day of Industry and Mines on Monday, Zarif called for collective efforts to counter the US economic pressures on Iran.

Denouncing the US for employing economic sanctions as a tool to bring the Iranian nation under pressure, Zarif said the US had plans to harm Iran’s economy by disrupting the foreign currency market.

Iran and the other countries are trying to cut their dependence on the US dollar to avert economic harms, Zarif added, saying Iran and Turkey have conducted 35 percent of the bilateral trade exchanges with their own currencies, namely rial and lira.

He also noted that even the United Arab Emirates and India, two major trade partners of the US, have abandoned the US dollar in part of trade transactions.

“The US’ closest allies want to distance themselves from that country (the US) in the economic relations,” Zarif noted, stressing that Iran should rely on its internal capacities to develop national production and cut down dependence on the other countries.

“Iran will not give in to pressures. The world must know that it should never threaten an Iranian,” he concluded.

In April 2018, the Iranian cabinet approved a plan to replace the US dollar with euro in reporting foreign currency amounts.

Foreign currency values began to rise in Iran after the US withdrew from the 2015 Iran nuclear deal in May 2018 and announced plans for a fresh wave of sanctions against the Islamic Republic.

There was growing demand for dollars among ordinary Iranians, who feared more plunge in the value of their assets and growing price of goods, even those not imported from abroad.

But the country soon took measures to arrest the national currency’s downward spiral.

Rial began to bounce back against US dollar later in the year after the Central Bank of Iran (CBI) unveiled a new package of regulations on foreign currency trade which lifted a ban on the activity of money exchange market.