Europe should act if wants to salvage nuclear deal

TEHRAN (defapress) – Iranian first Vice-President Es’hagh Jahangiri says the Europeans should undertake real actions against the US’ unilateral measures, which have undermined the 2015 nuclear agreement between Tehran and world powers, if they want to preserve the deal.
News ID: 78088 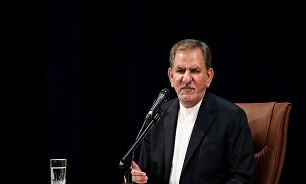 “Instead of holding different meetings and putting pressure on Iran to stay in the deal, the European countries should force the US to abandon its cruel sanctions,” Jahangiri said on Thursday.

Addressing the European parties to the deal, also known as the Joint Comprehensive Plan of Action (JCPOA), the Iranian vice president said, “Should you seek to preserve the deal, you would better to fulfill your [JCPOA] pledges.”

The official noted that Iran’s returning to full compliance under the pact is “an easy task” which could be done quickly, however, it depends on mutual respect and obligation of all parties to the deal.

Last May, Washington left the JCPOA that had been struck under the previous American administration. It then returned the nuclear-related sanctions that had been lifted by the deal.

On the first anniversary of Washington’s unilateral withdrawal the JCPOA, Iran notified the five remaining signatories -- France, Britain, China and Russia plus Germany -- of its decision to suspend some of its commitments for 60 days.

In the second phase of scaling down its JCPOA commitments, Iran increased the purity of its enriched uranium, saying it no longer is sticking to the 3.67% limit it had agreed to in the deal.

Tehran has said it would potentially scrap the deal if its partners failed to do enough for Iran to achieve the economic benefits that it is promised under the agreement.

Meanwhile, it says the doors to diplomacy are still open if the Europeans undertake necessary actions to secure Iran’s interests.

In an interview with NBC Nightly News’ Lester Holt on Monday, Iran’s Foreign Minister Mohammad Javad Zarif said the door is "wide open" to diplomacy if Trump removes the array of sanctions that have affected the country's trade and banking relations with other countries.

"Once those sanctions are lifted, then ... the room for negotiation is wide open," Zarif added.