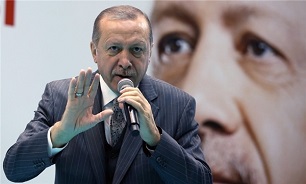 “Whoever is on the side of Israel, let everyone know that we are against them,” stated Erdogan while addressing senior provincial officials from the ruling Justice and Development Party (AKP) in Ankara on Saturday, presstv reported.

The remarks came amid a new wave of Israeli crackdown in the occupied Palestinian territories as regime forces continue with demolition of the Palestinian houses in occupied areas in the West Bank and in the Jerusalem al-Quds.

Israel came under renewed international criticism earlier this week after its forces stormed a neighborhood of the Sur Baher village in the West Bank early on Monday and destroyed Palestinian homes.

Tel Aviv claims the buildings had been constructed illegally and built too close to Israel’s apartheid wall in the region.

Palestinians, however, say Israel is using security as a pretext to force them out of the area as part of long-term efforts to expand settlements built on occupied Palestinian land and roads linking them.

Governments and rights campaigners have slammed the demolitions as a serious blow to international efforts to reach peace in the occupied territories.

Erdogan noted that Turkey will continue to promote the Palestinian cause regardless of efforts to undermine it mainly by supporters of the Israeli regime.

“We do not approve of silence on the state terror that Israel blatantly carries out in Palestine,” added the Turkish president.

Relations between Turkey and the US have soured in recent times due to Washington’s sanctions on Ankara which come over Turkey’s increasing defense cooperation with Russia.

Erdogan said US sanctions against Turkey would not deter the country from consolidating its military ties with Russia, especially those centered on Turkey’s deployment of modern Russian missile defense system.

“I would like to once again express that no threats or sanctions ... can prevent us from implementing our country’s security priorities,” he stressed.