President to Inaugurate Major Projects in Visit to NW Iran

TEHRAN (defapress) – Iranian President Hassan Rouhani plans to pay a visit to the northwestern province of East Azarbaijan on Thursday and inaugurate several major development projects there, the governor of the province said.
News ID: 78222 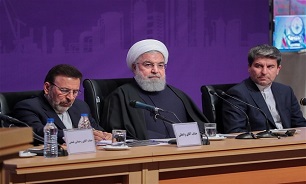 During the president’s visit to the province, a number of major development projects totally valued at 100,000 billion rials (about $2.4 million) will be inaugurated, he stated.

He further described the launch of water projects in border areas as the most important programs on the agenda of Rouhani’s trip to East Azarbaijan Province.

The governor went on to say that the first phase of the combined cycle power plant of Heris County in the province with a capacity to produce 300 megawatts of electricity will also be inaugurated.

In February 2018, Iranian Energy Minister Reza Ardekanian highlighted the country’s self-sufficiency in the area of power generation and said the Islamic Republic is the top producer of electricity in the Middle East.

About 90 percent of power generation equipment, even complicated parts like turbines and generators, are currently manufactured inside the country, the energy minister told reporters at the time.