TEHRAN (defapress)- US intelligence officials announced they have tracked a “new projectile” launch from North Korea, as the launch appears to be similar to the missile tests conducted over the past several weeks.
News ID: 78254 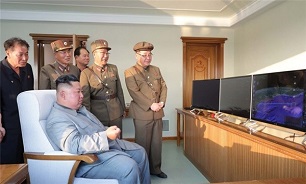 No details were given about the missile’s origin or target, except that it “did not pose a threat to North America”, Reuters reported on the Thursday afternoon launch, citing anonymous US officials.

Asked about the launch, US President Donald Trump said he was not worried, calling the missiles being tested by North Korea "very standard, short-range" devices.

North Korea has carried out its third missile test in eight days, according to the South's military.

An official from the JCS, who did not want to be named, citing office rules, told The Associated Press news agency that more analysis would be required to determine whether the projectiles were ballistic missiles or rocket artillery.

On Thursday, Pyongyang confirmed it had conducted tests of a “large-caliber multiple launch guided rocket system” the day before, firing several rockets into the Sea of Japan. Leader Kim Jong-un personally oversaw the launch, according to Korean Central News Agency (KCNA).

The new weapon was reportedly developed over the past three years and is intended to play a major role in ground operations, causing “inescapable distress” to hostile forces.

North Korea had paused its missile tests for about two years, pending its talks with the Trump administration about denuclearization and ending the frozen conflict in the Korean peninsula. The talks stalled during the February summit between Kim and Trump in Hanoi, Vietnam, as Pyongyang asked for the lifting of some sanctions as a goodwill gesture, while Washington insisted on complete disarmament before any sanctions relief.

The brief but historic meeting of Trump and Kim in the demilitarized zone in late June has not helped revive the process.

North and South Korea remain separated by the 1953 armistice line, which ended combat operations between the US-led UN forces on one side and North Korea and China on the other. Tens of thousands of US troops are still garrisoned in South Korea.