Iran’s Revived Destroyer to Be Equipped with Vertical Launch Missiles

TEHRAN (defapress) – Commander of the Iranian Navy Rear Admiral Hossein Khanzadi said the domestically made Damavand destroyer, which crashed into a jetty back in January last year, will return to service soon with vertical launch missiles installed on it.
News ID: 78276 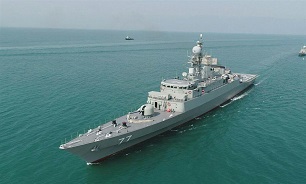 Speaking on the sidelines of the opening ceremony of the Depth competition of the 2019 International Army Games on Kish Island in southern Iran on Monday, Rear Admiral Khanzadi said the Damavand destroyer will rejoin the Navy’s northern fleet later this year.

“The destroyer has been fully revived and this has been done in 18 months,” the commander said, adding that all defects of the destroyer have been fixed.

He went on to say that the destroyer has been equipped with advanced radar systems that allow it to reach distant targets.

“The destroyer has been equipped with new weapons and we are seeking to equip the Damavand destroyer with vertical launch missiles,” Rear Admiral Khanzadi noted.

The Damavand destroyer crashed into a jetty on January 10, 2018, killing two sailors of the Iranian Navy. The accident occurred when Damavand was docking at port in Iran’s northern province of Gilan.

Increasing wind speed and severe storm in the Caspian Sea caused the destroyer to have a crash with the jetty.

Damavand, a 100-meter-long destroyer weighing more than 1300 tons, officially joined the Navy’s northern fleet in the Caspian Sea in March 2015.

More than 700 industrial, research and academic Iranian centers cooperated in designing and producing the military vessel, which is also a training warship.