TEHRAN (defapress)- Congressional Democrats and 2020 presidential hopefuls on Sunday sought to tie President Donald Trump's rhetoric on immigration to a massacre at a store in a Texas border city that is a shopping destination for Hispanic Americans and Mexicans.
News ID: 78281 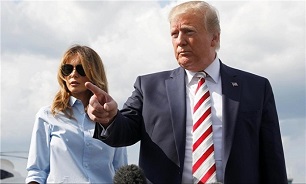 The mass shooting at an El Paso, Texas, Walmart on Saturday killed 20 people and left 26 others wounded. It came about 13 hours before a second mass shooting in Dayton, Ohio, left nine people dead and 27 wounded, The Hill reported.

Patrick Wood Crusius, 21, the accused gunman in the El Paso shooting, is the purported author of a racist, anti-immigrant manifesto.

Officials said Sunday they were treating the massacre as a case of domestic terrorism and exploring federal hate crime charges.

Authorities added that the suspected shooter drove eight hours from the Dallas-Fort Worth area to El Paso, which is directly across the border from Mexico’s Ciudad Juárez and is about 80 percent Hispanic. The alleged manifesto describes fears of a Latino “invasion”, which Trump critics were quick to note echoes rhetoric the president has used about migrants, particularly ahead of the 2018 midterms.

Presidential candidate and former Rep. Beto O’Rourke (D-Texas), who left the campaign trail to return to his hometown of El Paso after the shooting, said on CNN’s “State of the Union” that racist rhetoric from the president had contributed to the climate leading to the attack.

"Let's be very clear about what is causing this and who the president is. He is an open, avowed racist and encouraging more racism in this country," O'Rourke stated on Sunday.

"This cannot be open for debate, and you as well as I have a responsibility to call that out to make sure the American people know what is being done in their name," O'Rourke told CNN’s Jake Tapper, adding, "He doesn't even pretend to respect our differences or understand we are all created equal. He is saying some people are inherently defected."

"There's one person that's responsible directly for that shooting in El Paso, and that's the shooter. At the same time, as our national leader, you have a role to play in either fanning the flames of division or trying to bring Americans of different backgrounds together,” Castro, the former mayor of San Antonio, told ABC’s “This Week”.

"This president very early on made a choice to divide people for his own political benefit, and these are some of the consequences that we're seeing of that,” Castro added.

Sen. Cory Booker (D-N.J.), who is also running for president, tied the shooting to Trump’s rhetoric as well.

“When you have the president, from the highest moral office in our land, talking about invasions and infestations and shithole countries, the kinds of things that come out of his mouth that so harm the moral fabric of our nation, he is responsible,” Booker said on NBC’s “Meet the Press”.

“He's responsible when he has taken no action whatsoever to even condemn white supremacy, even when his own FBI is talking about this being sourcing major parts of our problem,” Booker added, referencing testimony in July from FBI Director Christopher Wray that the majority of domestic terrorism cases investigated in fiscal 2019 involved white supremacist violence.

O’Rourke’s successor in the House, Rep. Veronica Escobar (D-Texas), also took a dig at Trump’s rhetoric on immigration, albeit in less forceful terms than her predecessor.

"To be a safe community, we have to treat people with dignity and respect," Escobar said on ABC’s "This Week", noting, "We have a very different philosophy in El Paso from the philosophy that emanates from the White House. We embrace one another and take care of one another."

"It is very clear that the loss of American life ... is symptomatic of the effects of white nationalist terrorism," Buttigieg, who is running for president, told host Chris Wallace, adding, "There’s no question white nationalism is condoned at the highest levels of our government."

Both Buttigieg and O’Rourke cited remarks by Trump following the “Unite the Right” rally in 2017 in Charlottesville, Va., in which the president claimed that some participants in the white supremacist rally, which killed a counterprotester, were “very fine people” protesting the proposed removal of a statue of Robert E. Lee.

"I know white supremacists feel empowered by this president," Brown said on CNN's "State of the Union", stating, "I do know we've had two preceding presidents who dealt with [shootings] and tried to heal ... and this president doesn't."

Brown further called for McConnell to bring the Senate back into session to vote on a universal background check measure that has already passed the Democratic House.

Acting White House chief of staff Mick Mulvaney defended Trump on Sunday, insisting that the issue was that both shooters were “sick people”.

"This is a serious problem — there's no question about it — but they are sick, sick people, and the president knows it," Mulvaney said on ABC's "This Week", adding, "I don't think it's fair to try and lay this at the feet of the president."