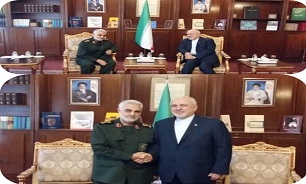 Major General Soleimani went to the Foreign Ministry in uniform on Tuesday morning and held a meeting with Foreign Minister Zarif, voicing support for the top Iranian diplomat and slamming the “lunatic” US move to impose sanction on Zarif as a “certain sign of defeat of the White House.”

“The US move proved that you, as the person in charge of the country’s foreign policy, have a great influence on the public opinion and particularly on the American people when it comes to the US leaders’ ignorance,” the IRGC general added.

Major General Soleimani also praised Zarif for his honesty and courage in protecting the national interests, and congratulated the foreign minister on becoming a target of the US anger and animosity because of affiliation with Leader of the Islamic Revolution Ayatollah Seyed Ali Khamenei.

The senior Iranian diplomat has dismissed the US move, saying that being designated by the US would not affect him since he has ho properties outside Iran.

“We know that calling for dialog & peace is an existential threat to B-Team. And since reason for designating me is my words, would ‘US persons’ need OFAC license to ‘engage’ with me by reading my writings or listening to interviews?” Zarif said in a Twitter post.

The Iranian foreign minister has received widespread public support and backing from the authorities after being blacklisted by the US.