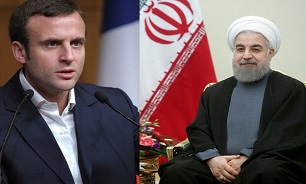 A report by Washington-based Al-Monitor on Tuesday cited two anonymous sources as saying that French President Emanuel Macron invited Iranian President Hassan Rouhani to attend the G-7 summit on August 24 at the coastal resort of Biarritz, France, to meet with US President Donald Trump.

According to the report, Macron promised that many issues between Tehran and Washington beyond the JCPOA would be solved. Rouhani, however, declined to attend or send a representative which naturally would have been Foreign Minister Mohammad Javad Zarif.

This comes as Rouhani and Macron spoke for the third time in the past month on the phone, with the most recent one taking place last night.

During the telephone conversation on Tuesday, Rouhani said Iran was open to new proposals for finding a solution on the current situation of the JCPOA, adding, however, that Tehran views a restored interaction with the world on banking issues and oil exports as the “most fundamental” of its economic rights.

On Tuesday speaking at the Foreign Ministry building visiting Zarif, which came a few days after the Trump administration imposed sanctions on the Iranian top diplomat, Rouhani said that if the US is genuine about holding talks with Iran, it needs to remove all sanctions against the country before anything else.

Meanwhile, the Lebanese Asharq al-Awsat newspaper has cited unknown sources at the French presidential office who have rejected the news that Macron has invited Rouhani to attend the G-7 summit in his Tuesday telephone conversation with the Iranian president.