TEHRAN (defapress) – Iran’s mission to the United Nations wrote a letter to the body’s Secretary-General Antonio Guterres, highlighting that new US sanctions on Iranian Foreign Minister Zarif is unlawful and a threat to multilateralism.
News ID: 78301 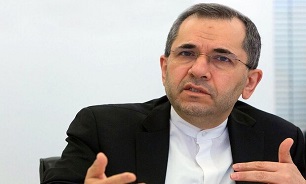 “The Islamic Republic of Iran deems such illegal action a flagrant infringement of the fundamental principles of diplomatic law, in particular the principle of inviolability and immunity of high-ranking foreign officials, including immunity of incumbent ministers of foreign affairs, as a universally accepted norm and rule of customary international law,” Iran's Ambassador and Permanent Representative to the United Nations Majid Takhte-Ravanchi wrote.

The administration of US President Donald Trump imposed sanctions on Zarif on Wednesday, saying in its statement that Zarif is Iran's "primary spokesperson around the world," and that the ban "is sending a clear message that Iran's recent behavior is completely unacceptable.” The move was quickly condemned by Iranian officials as well as the international community because of its contradiction to the international law.

Zarif said Monday that that imposing sanction on a country’s foreign minister means “failure in negotiations, failure in diplomacy, and opposition to dialogue.”

Here is the full text of Iran’s mission letter to Guterres:

I am writing to you to bring to your kind attention yet another unlawful and undiplomatic move by the government of the United States against my country, i.e. the imposition of illegal sanctions against H.E. Dr. Mohammad Javad Zarif, Minister of Foreign Affairs of the Islamic Republic of Iran, in gross violation of the fundamental norms and principles of international law, including the purposes and principles of the Charter of the United Nations.

Ironically, the officials of the current administration of the United States have claimed that the illegal sanctions have been imposed due to the role and position of our Foreign Minister, who is the responsible authority for the foreign policy of the Islamic Republic of Iran. Infatuated with rogue, unreasonable conducts at the international level, this well signifies that the U.S. regime despises diplomacy, which is one of the greatest achievements of humanity to preserve and uphold peace and security among nations.  It reveals the deeply-rooted hypocrisy of the United States’ authorities in their different but paradoxical claims.

Although the unlawful move is claimed to target Iran’s Minister of Foreign Affairs, considering the official and shameless claims of the U.S. administration, this illegal restriction is part of its overall policy in waging economic terrorism against the Iranian people and bringing pressure to bear on their representatives.

The Islamic Republic of Iran deems such illegal action a flagrant infringement of the fundamental principles of diplomatic law, in particular the principle of inviolability and immunity of high-ranking foreign officials, including immunity of incumbent ministers of foreign affairs, as a universally accepted norm and rule of customary international law.

Likewise, it is in contradiction with many relevant consensual resolutions of the United Nations General Assembly, the latest of which is resolution  73/212 that, by underlining the obligation of the United States for the observance of the privileges and immunities of the missions accredited to the United Nations, “which cannot be subject to any restrictions arising from the bilateral relations of the host country”, “urges the host country to remove without delay any restrictions applied”  and “to ensure respect for such privileges and immunities”.

Furthermore, the principle of diplomatic immunity lies at the core of international law and any derogation from this principle is a serious threat to the sound conduct of normal international relations and the promotion of cooperation among States. The illegal imposition of sanctions on the Minister of Foreign Affairs of the Islamic Republic of Iran also violates the principle of sovereign equality of States and the principle of par in parem non habet imperium, which constitutes the basis for the immunity ratione materiae of States officials, including in particular ministers of foreign affairs.

At the same time, the ramifications of the United States’ unlawful action are not confined to the legal context only. The brazen violation of the fundamental principles of international law, which have thrived and been respected throughout history, and coercing nations into complying with the United States’ illegal demands threatens multilateralism, as the foundation of international relations, and sets a dangerous precedent, paving the way for those who aspire to rather divide, not unite, nations.

It will also undermine the call for dialogue and diplomacy and embolden those who seek to endanger international stability and peaceful co-existence of nations.

Thus, it is imperative for the international community to condemn the United States’ unlawful behavior in the interest of promoting multilateralism.

The United Nations, its Member States and its bodies should stand firm in defending the established principles of international law. Respectfully, the Islamic Republic of Iran expects your Excellency to play your active role in preserving the integrity of the United Nations in line with your responsibility to counter the current dangerous trend.