TEHRAN (defapress) - A court in Kyrgyzstan has ordered former president Almazbek Atambayev held in custody until August 26, a spokesman said Friday, after he was detained in a major security operation at his home that sparked unrest by his supporters.
News ID: 78329 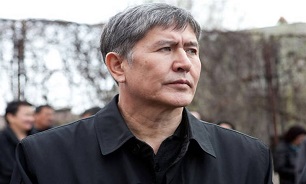 The Central Asian state, which has seen two revolutions in less than two decades, is on the brink of crisis amid a standoff between Atambayev and his protege-turned-foe President Sooronbai Jeenbekov.

Atambayev was detained by security services on Thursday at his residence in the village of Koi-Tash near the capital Bishkek, capital of the Muslim-majority nation of six million people, in the second raid in two days on the compound.

During the first operation on Wednesday, his supporters clashed with security forces leaving leaving one officer dead.

A spokesman for the Pervomaiski District Court in Bishkek told AFP it had issued an order late on Thursday that Atambayev be held in custody until August 26.

The spokesman did not say on what charges he is being held.

Atambayev had ignored three police summonses for questioning in connection with the release of a well-known underworld figure during his presidency.

The state prosecutor said Thursday that Atambayev figures in a total of five criminal cases. Critics say the investigations are politically motivated.

On Wednesday an already tense political situation escalated when the national security service announced an operation to take Atambayev from his residence outside Bishkek.

The first operation failed and descended into violence.