TEHRAN (defapress) – Palestinian President Mahmoud Abbas on Saturday said that "Israeli settlements on Palestinian lands are going to disappear into the dustbin of history," as he addressed Palestinian refugees near Ramallah.
News ID: 78347 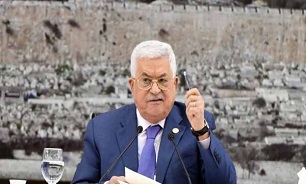 Abbas visited Jalazon refugee camp, which is located opposite to Israeli Beit El settlement, at the northern entrance of Ramallah city, ahead of the Eid al-Adha, Xinhua reported.

"The Palestinian people will remain steadfast, resilient and struggling on its land," Abbas said, according to the official news agency WAFA.

The comments are among the most pointed coming from Abbas, a man whose 14-year-old tenure as President of the Palestinian Authority has proved to be mostly unpopular mainly due to his close security cooperation with the Israeli regime over the years.