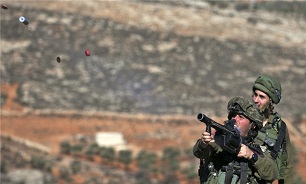 The victim, identified as Marwan Khalid Nasser, 25, was killed in the Northern city of Beit Hanoun in Gaza along the fence separating the territory from the occupied lands on Sunday, Middle East News reported.

The Israeli military claimed that it had spotted the Palestinian approaching the fence and alleged that he had opened fire with unspecified weapons at Israeli forces on the other side.

The Israeli army also announced that it had shelled a number of observation posts in Gaza controlled by the Hamas resistance movement in response to the alleged attempt by Nasser to cross over the fence.

On Saturday, Israeli forces shot dead four Palestinians east of the city of Deir al-Balah along the Gaza fence.

The Great March of Return was launched in late March 2018 in an effort to shed light on the Palestinian refugees' right of return and pressure Israel to lift the 13-year-long blockade on the Gaza Strip.

Since the start of the border protests, the Israeli occupation army has killed more than 310 Palestinians and injured over 31,000 in the Gaza Strip.

A UN fact-finding mission has announced that Israeli forces committed rights violations during their crackdown against Palestinian demonstrators in the Gaza Strip last year that may amount to “war crimes”, urging the regime’s military to prevent its snipers from using lethal force against the demonstrators.

The UN Independent Commission of Inquiry on the protests in the Occupied Palestinian Territory presented its full report in mid-May, saying Israeli forces breached international human rights by using live ammunition against unarmed Palestinian protesters during the anti-Israel demonstrations in Gaza

The UN has warned that 1,700 Gazans shot by Israel Defense Forces at protests may need amputations in the next two years because of a lack of healthcare funding to help them recover.