Attempts to block Zarif’s reach on social networks not to affect his influence in intl. community

TEHRAN (defapress) – FM spokesman Mousavi reacted to news about Americans’ attempt to block FM Zarif’s accounts on social networks for fear of his influence, saying the voice of the top Iranian diplomat will continue to be heard in international community.
News ID: 78365 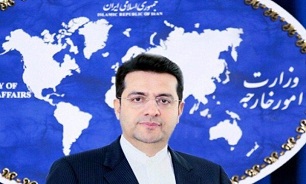 In a statement on Sunday, the foreign ministry spokesman said that the US’ attempt to block FM Zarif’s accounts on social networking websites resulted from the “anger of those who were afraid of his voice in the international community.”

Mousavi also referred to Zarif’s effective presence in international community and social networking websites such as Twitter as a reason for the US action.

The spokesman also noted that action against the top Iranian diplomat revealed to what extent the Americans really believe in freedom of expression and press.

In reaction to his American counterpart’s remarks that the US president Donald Trump is still waiting for telephone calls from Iranian officials, Mousavi said that although the Americans have expected that from the Islamic Republic of Iran for a long time, their expectation will be ‘futile.’

He further rejected the Americans’ calls for negotiation with Iran as ‘dishonest’ and a sign of 'confusion' in the US foreign policy.