TEHRAN (defapress)- Pyongyang signaled its unwillingness to continue negotiations with its Southern neighbor, blaming the diplomatic deadlock on South Korea’s decision to participate in joint military exercises with the United States.
News ID: 78399 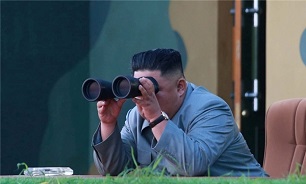 “Even at this moment, South Korea continues its joint military exercise and to speak of a peaceful economy or a peaceful regime, it has no right to do so,” the statement read.

Pyongyang also expressed its displeasure with South Korean President Moon Jae-in, who said in a speech on Thursday that he envisioned a united Korean Peninsula by 2045. The statement described Moon as a “shameless man” who “mentions ‘talks’ between North and South while playing out war scenarios that plan to destroy most of our armies in 90 days”.

While criticizing Seoul’s military drills, North Korea has been participating in some military flexing of its own.

On Friday, Pyongyang reportedly launched two projectiles into the sea off its Eastern coast. The launches mark the country’s sixth missile test in the last four weeks.

North Korea announced earlier that the launches “send an adequate warning” to the United States and South Korea, after the two nations resumed joint military drills.

US President Donald Trump has dismissed concerns over the tests, noting that they involve short-range missiles and that Pyongyang has halted development of its nuclear weapons program.